~ Journal Vision How to move a 4D object while being locked in a 3D-only space.

How to move a 4D object while being locked in a 3D-only space.

A Tesseract (or hypercube), the 4D version of a 3D cube

An animated one
Another animated tesseract, but with an ostrich inside

On the 4th space dimension

We perceive space in three different dimensions/coordinates (usually named as x, y and z). All our life, from birth to death, passes through the good old 3D limited lenses.

While this has served us well, making the human being thrive on the planet earth, there may be others space dimensions as well.

I'm not advocating that there is a 4th (or a nth: with n > 3) space dimension, I'm just wondering, in case there is, how it could work, be perceived, and managed to deliver advancement in our boring 3D world.

I think that the concept itself is a really fascinating discussion topic.

I recommend to all readers interested in the topic the book "Flatland: A Romance of Many Dimensions". It is a really great book I read and enjoined a lot (see my full books list

How could we even try to perceive a 4th space dimension? We'll try by analogy! How would a 2D world perceive a 3D sphere entering and moving through its flat 2D plane of existence? 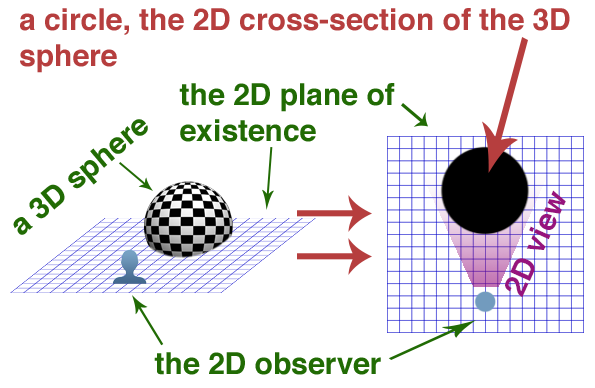 We instead live ((?->experience)(ℜ:Philosophy:Kant:"on space, time and causality" [1])) through time, hence we need to add time into our not-so-tasty soup just like it were a pinch of salt to turn it all in a much more interesting dish.

Time introduces movement. Yey! This is not a small point!

How does a 4D object move around in a 3D world? Let's try to reason by analogy again!

Imagine a sphere moving through a 2D plane, from a 2D inhabitant it would be perceived as a line free to move around, it can also shrink, grow, disappear from a point and reappear in another one, maybe inside some other 2D object, all of a sudden!

It can freely move in our common directions, here noting weird, unless it is suspended in the air.

It can move (3D object and 2D effect)

It can move (4D object and 3D effect)

First strange thing happening here! It can resize if moved in an un-common (for the observer) axis.

It can resize (3D object and 2D effect)

It can resize (4D object and 3D effect)

Second strange thing happening here! Using different vector forces in both common and un-common axis, it can literally disappear from one place and re-appear in another one.

It can disappear/reappear (3D object and 2D effect)

It can disappear/reappear (4D object and 3D effect)

Porting this into our perspective as an n dimensions inhabitants experiencing an n+1 object, we would see a 3D common (for us!) object, but it would be totally free to move around us, stay suspended in the middle of the sky, shrink and grow (resize) in all our perceived 3 space dimensions, relatively or independently, disappear in a moment and reappear inside a closed high-security watched

How to move it

Now to the final point, the big part was understanding how to imagine it and how it could be perceived being us the observers.

How a 3D object can be moved in a 2D space? A 2D observer could exert forces (vectors) only in his 2D plane of action.

So, in case we consider physically negligible 3D forces that may slow down or block the object in the 3D space (like frictions or constraints, not visible in the 2D plane), the 2D inhabitant could freely move the object in his available dimensionsx and y.

He couldn't however access the 3rd dimension, making for him impossible to make the object shrink, grow, disappear or reappear inside something. For the 2D inhabitant it would be like a common object, with common interactions, but capable of weird and great things if something else, with access to the 3rd dimension, would move it in the new (new for the 2D observer) coordinate.

So, for us, as the 3D object for the 2D inhabitant, the 4D object would be a common object, we would be able (unless frictions and constrains in the 4D space) to freely move it as it was like a chair.

Unfortunately, having not access to the 4D space axis, we would not be able to access its cool stuff, we couldn't make it shrink, grow, disappear etc., unless we found a proxy to the 4D space to manipulate the object position in the 4th space axis.

But this will be the content for a next article trying to explore an hypothetical proxy to the 4th space axis.

[1] What justifies Kant's claim that time, space, and causality are qualities of subjective perception, not objective reality?

"Flatland: A Romance of Many Dimensions"

Latest from Vision browse all